Chicago is a town in United States of America. It is located in the state of Illinois on the shores of Lake Michigan. With a population of 2.6 million, it is the third most populous city in the United States (after New York and Los Angeles); The Chicago metropolitan area has a population of nearly 10 million. 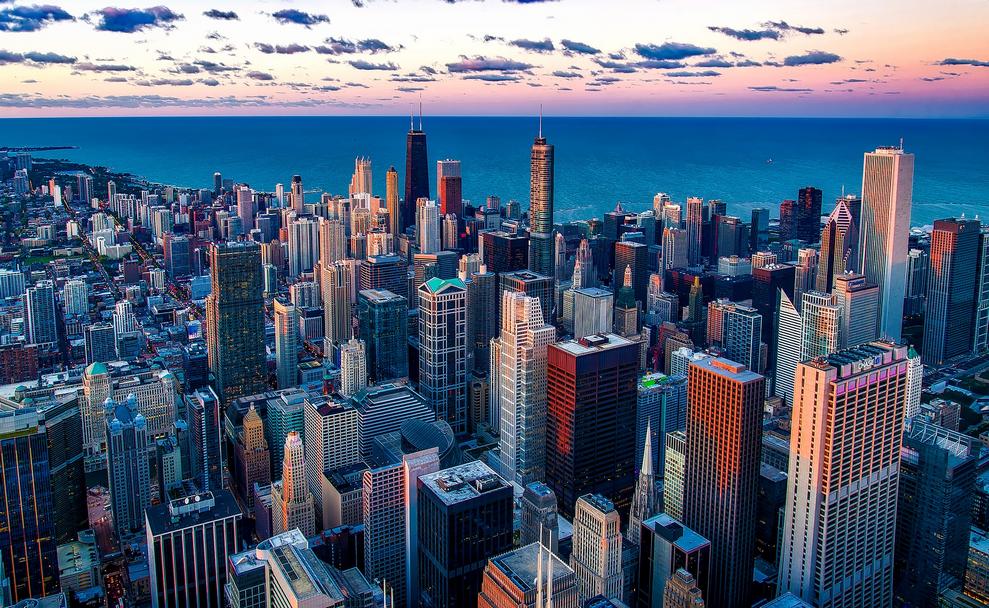 At the beginning of the 20th century, more than a hundred thousand Czech immigrants lived in Chicago, which at the time, after Prague and Vienna, de facto made it the third largest city with a Czech population in the world.

In 1673, two French travelers, Louis Jolliet and Jacques Marquette, established a temporary base on the swampy shores of Lake Michigan. The place was very inhospitable, but merchants and fur hunters still passed through. In 1770, Haitian Jean-Baptiste Point du Sable built a log cabin in the swamp and established a permanent trading post. The station was of great importance as the United States border shifted westward and farmers who settled in Native American territory needed to get their products eastward. In 1803, the US military built Fort Dearborn here. Later, on March 4, 1837, Chicago was officially founded. Due to its strategic location and expanding railroads, Chicago became an industrial and commercial center of the then Midwest in the mid-19th century. At the beginning of the 20th century, a large minority of Czech immigrants lived here - about 100,000 (according to an estimate by Jaroslav Egon Salaby-Vojan from 1911, but in fact up to 152,960) - which at that time made Chicago the city with the third largest Czech population in the world ( after Prague and Vienna). One of them, Antonín Čermák, was mayor of the town in 1931–1933. Another immigrant, Serb Rod Blagojevich, even reached the post of governor of Illinois. On the shores of Lake Michigan, on May 5, 1918, more than 200,000 supporters were solemnly welcomed on their arrival in America, on his journey "around the world," Professor Tomáš Garrigue Masaryk.

Industry and economics of Chicago

Chicago has grown due to its strategic location. All agricultural products from the Midwest and the Great Prairies are imported to Chicago for processing. There are large mills and slaughterhouses. In addition to the food industry, the manufacturing industry (ie the engineering, metallurgical, chemical and consumer electronics industries) and the Hi-Tech industry and the information technology industry thrive in Chicago. In the last 5 years, a large number of industrial companies and factories have been established or moved here in Chicago (eg the Boeing Company of Seattle). Chicago is also a seaport, because large ships can arrive here on the St. Lawrence waterway from the Atlantic, and Chicago is connected to the Mississippi by several canals; this way the ships will reach New Orleans and the Gulf of Mexico. There are 27 railways from Chicago through which trains import and export coal, iron ore, steel, and chemical and food products. 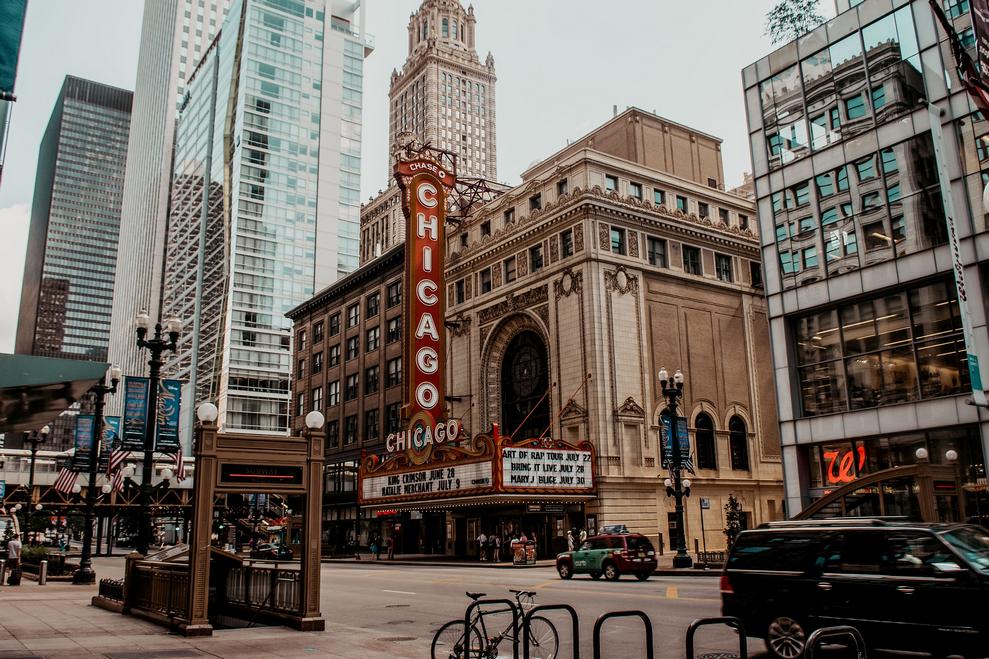 Chicago had the largest population in 1950, when it had over 3.6 million inhabitants. The number of people has been declining since 1960, and in recent years the city has seen a significant increase. Chicago is the melting pot of a large number of cultures and nationalities. A large minority of Czechs, Slovaks and Poles also live here. The main ethnic groups are Irish, Germans, Italians, Poles, Chinese and Mexicans. Chicago has a large population of Irish Americans in the south and southwest of the city, although numbers have moved to the suburbs in the mid-20th century. Many city politicians have sprung up from this large Irish population, including former Mayor Richard M. Daley. Chicago has the largest Polish population outside Warsaw, the capital of Poland. Chicago is also considered the second largest Serbian and Latvian city in the world and also the third largest Greek city in the world. The city also has a large Arab (185 thousand) and Romanian (over 100 thousand) population. Chicago has the second largest population of Mexican Americans in the United States, the largest being in Los Angeles. The Chicago metropolitan area is an important center for Indo-Americans and South Asians. Chicago has the third largest South Asian population in the United States, after New York and San Francisco.

Crime is relatively high in Chicago, but is declining from year to year. The number of homicides in 2006 was half the number 1990. One of Chicago's biggest problems is the presence of slums near downtown. That is why old buildings are being demolished in these neighborhoods and new ones are being built for the middle class. As a result, the situation has improved, especially northwest of Downtown, where drug gangs were at war two years ago. New family houses are now standing here and crime has dropped significantly. Most of the poor people left for south Chicago, where the situation is traditionally bad. On Wednesday, January 18, 2012, the local police officers finally had reason to celebrate - after about a year, no one was killed here for 24 hours.

Rahm Israel Emanuel has been the new mayor of Chicago since May 16, 2011. His predecessor, Richard Michael Daley, has held the post since 1989, for 22 years. Both are members of the Democratic Party. Daley is the son of former Mayor Richard J. Daley, his younger brother William Daley was Secretary of Commerce under President Bill Clinton. The Daley family is of Irish descent and one of the most influential political clans in America. Like the Kennedy, the Daley are involved in politics for the Democratic Party.

Chicago has traditionally elected Democrats as mayors, who have ruled the city continuously for more than eighty years. Former Mayor Daley himself is a liberal politician who supports women's abortion rights and gay rights. However, Daley is working hard against crime and is heavily involved in environmental policy. In a prestigious poll by Time and USA Today, Daley was voted Chicago's best mayor and one of the top five mayors in the United States.

In the 2003 election, Daley faced two independent rivals and one Republican. In a campaign that took place during a period of significant crime reduction and the first population growth in Chicago since 1950, Daley was in an advantageous position and was commented on as a certain winner by commentators. In the election, Richard Daley won an extraordinary 78 percent of all votes cast.

Chicago is one of the largest centers of higher learning in the world. There are over 600 public schools, including the best universities in the United States; eg the University of Chicago, Northwestern University, DePaul University or Loyola University.

Commercial and cultural center of the city and downtown; Chicago's tallest building is located here. Loop is located between Near North Side and Near South Side. All the lines of the overhead railway, which converge here in one large overground circuit (hence the name Loop), lead here.

The North Side is the richest part of Chicago. It is located north of the Chicago River and partially (Near North) extends into downtown. Ethnically, it is the main "melting pot" in Chicago. Many German, Swedish and Polish immigrants live here, making it a diverse area. The area around Devon Avenue is home to immigrants from the Middle East and South Asia. It is characterized by a number of typical restaurants and shops. The most popular areas are Lincoln Park and Lakeview. River North, an area north of the Chicago River and downtown, has undergone a rapid transformation from a former, rather deserted and warehouse district, to a commercial, residential and entertainment zone, built up by a number of modern skyscrapers.

From 1860 to 1940, the South Side was home to many European ethnic groups, mainly Irish. After 1945, most Europeans moved to the suburbs. In their place came African Americans from the South and Puerto Rican. Recently, a large number of Hispanics, especially Mexicans, have arrived. Large industrial complexes and factories were mostly closed, including the famous slaughterhouses, which in 1920 employed over 50,000 people. However, many areas are also inhabited by the middle class and these areas are thriving. Chinatown, for example, has become a place of East Asian culture. Many shops and restaurants have grown here. Hyde Park is home to the prestigious University of Chicago. Improvements can be seen in areas such as Woodlawn, Bronzeville, Bridgeport and McKinley Park. The demolition of old dilapidated buildings, which are being replaced by new ones, continues. As a result, a better suburban-type environment is created here. One of the oldest parts of Chicago, the Pullman, is located on the South Side.

There are mostly residential areas in southwest Chicago. Lots of Irish Americans live here (but blacks are growing to the east). There is a big celebration in the area on St. Patrick. In the south-west part of the airport, Midway International Airport.

The area was very successful around 1990. There are three large parks in the area: Douglas Park, Garfield Park and Humboldt Park. West Chicago is also home to much of the city's Hispanic population. There is also a district founded by Czech immigrants in the West Side region - Pilsen (in Pilsen translation).

Chicago is an important transportation hub in the United States. It is the only city in North America through which all six Class I railways pass.

Millennium Station in the center is mainly in charge of suburban connections, such as the South Shore Line, which is the railroad leading from South Bend, Indiana, through Michigan City and Gary to Chicago.

As far as road traffic is concerned, there are many multi-lane roads and boulevards in Chicago, and due to their width, traffic jams rarely occur in the city center. The main artery is Michigan Avenue, which begins north of downtown Lincoln Park, runs south past 875 North Michigan Avenue, across the Chicago River, and past Millennium and Grant Parks further south. Another important artery, this time the highway, is Lake Shore Drive, which runs along Lake Michigan.

Chicago intersects 7 interstate highways. They usually have the names of well-known politicians (such as I-90 The Kennedy Expressway).

Public transportation in Chicago and adjacent suburbs is provided by the Chicago Transit Authority (CTA). The city has an extensive bus network and an underground / overground system, called "El" (from the English elevated - above ground). It is basically a set of subways that goes underground for a while (then it is called the subway) and for a while above the ground (it is then "above ground"). However, only 13% of the Chicago subway is underground, the rest is above ground. In the years 1858 - 1958 the city had a tram network (at its peak in 1947 it was the 3rd longest in history) and from April 17, 1930 to May 25, 1973 a trolleybus system. 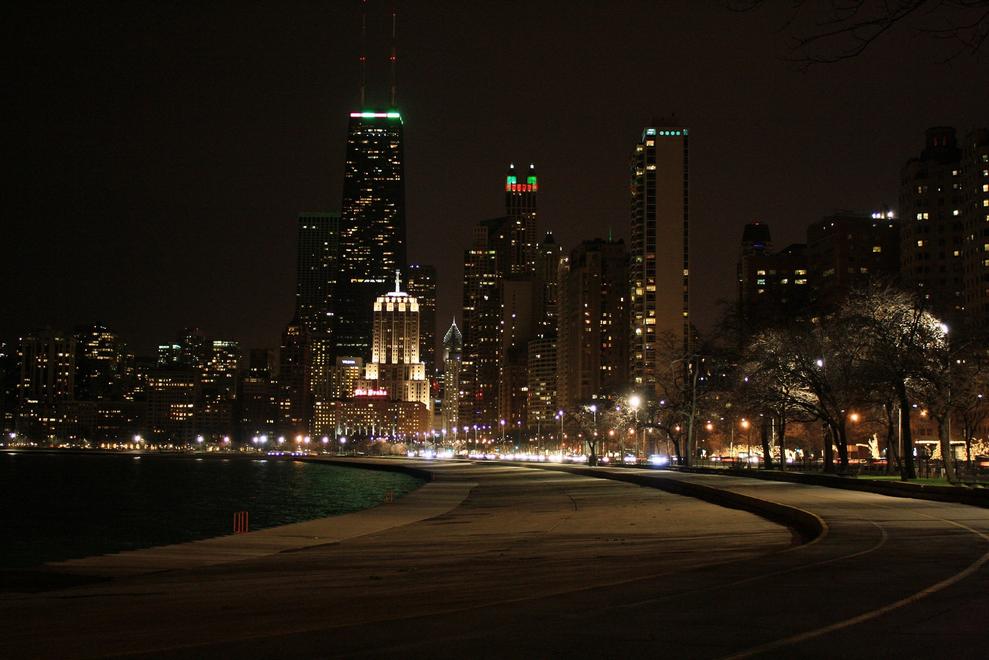 Chicago also has great air connections, there are 11 airports in the area - O'Hare Airport is the third largest in the world (after Atlanta and Beijing).

The band Smashing Pumpkins and the musical group Team StarKid were formed in Chicago.