Hanoi is the capital and important political, economic and cultural center of Vietnam. The city lies in the north of the country, about 100 km west of the Gulf of Tonkin. The Red River (v. Sông Hồng) flows through it. Approximately 8.25 million people live here. 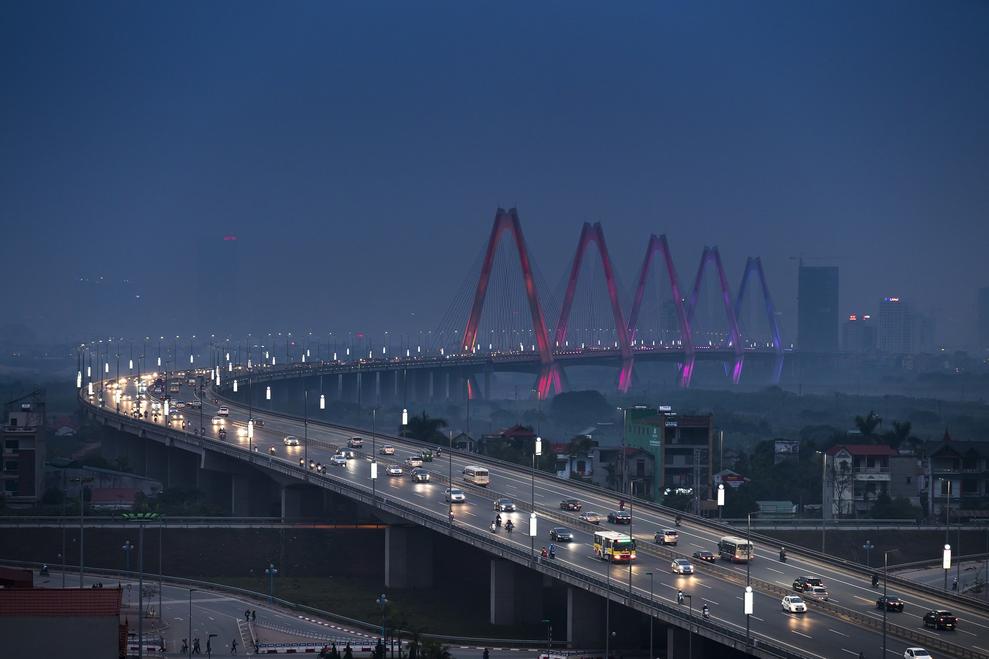 The first mention of the site dates back to the mid-10th century AD, when North Vietnam was under Chinese rule. In Chinese chronicles we find records from the 6th century. In 1010, the first king of the Vietnam dynasty Ly (v. Lý, 1010–1225), Ly Thai To (v. Lý Thái Tổ), chose this city as his seat and moved here from the former Hoa Lu (v. Hoa Lư). ). He named the new capital of his empire, Dai Co Viet (v. Đại Cổ Việt), Thang Long (v. Thăng Long, "The City of the Flying Dragon"). Until the beginning of the 19th century, Thang Long was the most important center of the whole empire, but it was renamed several times. It was not until the turn of the 18th century that the city was deprived of its privileged importance, as the Tay Son rebel dynasty (1778–1802) and subsequently the Nguyen royal dynasty (1802–1945) made the Central Vietnamese city of Hue the new center of the empire.

In 1831, the second monarch gave. Nguyen, Minh Mang (v. Minh Mạng), rename Thang Long to Ha Noi (v. Hà Nội, "City on the inner side of the river" - the "inner" side meant the southern bank of the Red River), this name is traditionally transliterated into Czech like Hanoi. In 1883, Hanoi became the capital of the French Protectorate of Tonkin, which includes today's North Vietnam. From 1954 to 1976, Hanoi was the capital of North Vietnam (ie the Democratic Republic of Vietnam), and since 1976 it has been the capital and political center of a united Vietnam (Socialist Republic of Vietnam).

The core of today's modern city was designed during the French colonial government between 1887 and 1946. During the American War in Indochina in 1964–1975, the city was very bombed and much of its buildings were damaged or destroyed.

Cultural heritage of the city

Hanoi is an important cultural center of Vietnam with a rich history. Archaeological excavations have been carried out in the city center since 2002, which revealed the remains of buildings from 7-8. century n. l. Only modest remains of the former royal fortress remain, including the Doan Mon gate and the flag tower. The most famous monuments of the city are the Temple of Literature and the Pagoda on one pillar, whose origins date back to the 11th century. Many temples and pagodas (of which there are reportedly more than 600 in Hanoi) also have ancient origins, the State Defense Pagoda was established in the 6th century, the temple of the protective spirit Tran Vua (also called Quan Thanh Temple) was founded in the early 11th century. century.

The center of Hanoi is considered to be the Lake of the Returned Sword, one of the symbols of the city, on the islands of which stand the Temple of the Jade Mountain and the Turtle Tower. In the immediate vicinity of Jezera, there is a quarter of old streets (usually 36 streets), which were originally associated with various craft guilds, and according to their original specialization are still named: Vějířová Street, Klobouková Street, Uhelná Street, etc.

Other remarkable buildings date from the period of French colonization, which today complete the atmosphere of the city: the Hanoi Opera, the Cathedral of St. Joseph, Long Bien Bridge, the Presidential Palace or the Historical Museum building. The newer landmark of the city is the Ho Chi Minh Mausoleum on Ba Dinh Square, built in 1975. Of the many museums, the Historical Museum and the Museum of Art are worth mentioning. The French also participated in the establishment of a new Ethnographic Museum (founded in 1997).

Hanoi has experienced relatively strong economic growth since the 1990s, but this is also accompanied by significant population growth and is facing unresolved infrastructure problems.

There are currently 9 large industrial zones in Hanoi, and other industrial parks are being built. The city generates 8.4% of GDP in all of Vietnam. In addition to manufacturing (textiles, cement, machine parts, chemicals, but in recent years also electronics, software) and processing industries, Hanoi is a major service center (especially in tourism) and trade. 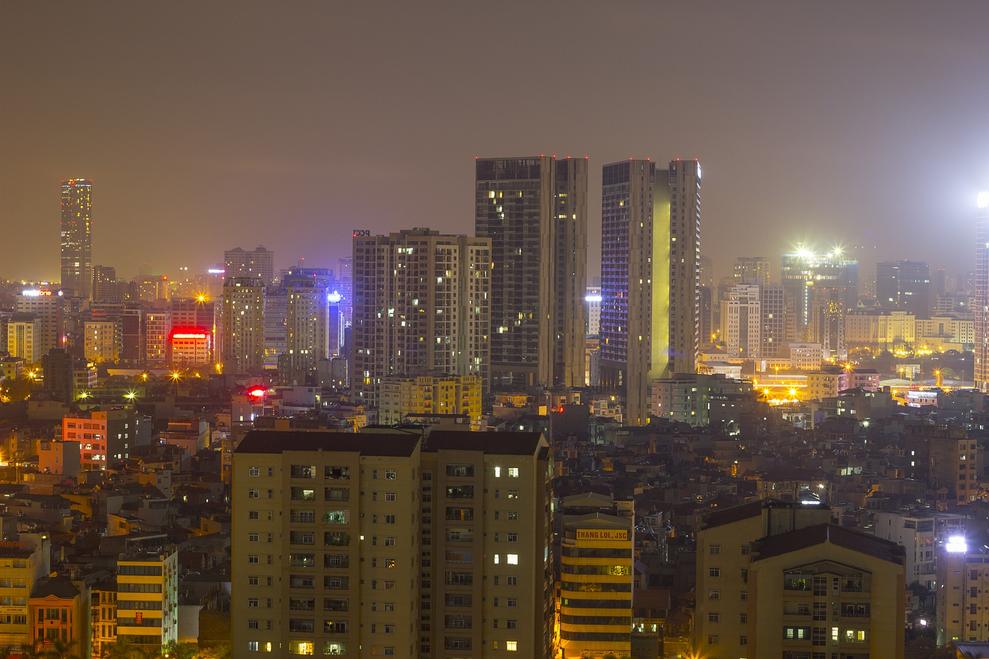 A large number of large-scale construction projects are currently underway, which include entire urban areas, such as Trung Hoa-Nhan Chinh or My Dinh, where, among other things, a magnificent modern conference center and the National Stadium were built. Large sums are being invested in the construction of new roads (several new bridges over the Red River, bypass roads), but a more comprehensive transport infrastructure solution is being postponed. The traffic situation in Hanoi is increasingly alarming (constant congestion, polluted air, noise), there is only one means of public transport, buses. Therefore, most Hanoi people move on their own motorcycles.

According to Mastercard’s 2019 report, Hanoi is Vietnam's most visited city (15th in Asia Pacific), with 4.8 million overnight international visitors in 2018. Hanoi is sometimes dubbed the "Paris of the East" for its French influences. With its tree-fringed boulevards, more than two dozen lakes and thousands of French colonial-era buildings, Hanoi is a popular tourist destination.

The tourist destinations in Hanoi are generally grouped into two main areas: the Old Quarter and the French Quarter(s). The "Old Quarter" is in the northern half of Hoàn Kiếm District with small street blocks and alleys, and a traditional Vietnamese atmosphere. Many streets in the Old Quarter have names signifying the goods ("hàng") the local merchants were or are specialized in. For example, "Hàng Bạc" (silver stores) still have many stores specializing in trading silver and jewelries.

The political center of Vietnam, Ba Đình has a high concentration of Vietnamese government headquarters, including the Presidential Palace, the National Assembly Building, and several ministries and embassies, most of which used administrative buildings of colonial French Indochina. The One Pillar Pagoda, the Lycée du Protectorat and the Ho Chi Minh Mausoleum are also in Ba Dinh.

South of Hoàn Kiếm's "French Quarter" has several French-Colonial landmarks, including the Hanoi Opera House, the Sofitel Legend Metropole Hanoi hotel, the National Museum of Vietnamese History (formerly the École française d'Extrême-Orient), and the St. Joseph's Cathedral. Most of the French-Colonial buildings in Hoan Kiem are now used as foreign embassies.

Since 2014, Hanoi has consistently been voted in the world's top ten destinations by TripAdvisor. It ranked 8th in 2014, 4th in 2015 and 8th in 2016. Hanoi is the most affordable international destination in TripAdvisor's annual TripIndex report. In 2017, Hanoi will welcome more than 5 million international tourists.

On 6 November 2018, it was announced that in 2020, Hanoi would become the host of the first FIA Formula 1 Vietnamese Grand Prix on a street circuit on the outskirts of the city. The race was initially postponed and later cancelled due to the COVID-19 pandemic and the inaugural edition of the event postponed to 2021. The Grand Prix was removed from the 2021 calendar because of the arrest of Hanoi People's Committee Chairman Nguyễn Đức Chung on corruption charges unrelated to the Grand Prix.