Istanbul is located on the European and Asian coasts of the Bosphorus. Already in the times of the Byzantine Empire, the then Constantinople, its capital, was an important trading crossroads and the gateway to the Orient. In the Slavic environment, the name Constantinople has also been used for Constantinople since the 9th century (in various transcripts according to language).

The character of the city

Istanbul is famous mainly as a city that spreads over two continents. It went down in history under various names: Byzantium, Constantinople or Constantinople.

The Bosphorus is connected and divided at the same time by both continents. In the European part there are most important monuments from the times of the Byzantine Empire and also the historical center of the city, originally from the times of the Roman Empire. The Bosphorus is a strategic sea strait, widely used for transport. Its name means "The one with the narrow throat". The depth of this strait is 118 meters, it is 31.5 kilometers long. This sea route connects the Black Sea with the Sea of ​​Marmara. According to legend, they crossed the Bosphorus as the first Argonauts looking for a golden fleece.

About 20 kilometers south of Istanbul is the North Anatolian Fault, a lithospheric boundary with frequent earthquakes of varying magnitude and devastating earthquakes.

The rich history of the city dates back to ancient times; the city was founded as a small settlement Byzantium. In 330, Emperor Constantine I the Great elevated Byzantium to the capital of the eastern part of the Roman Empire. It was first named Nova Roma (New Rome), but Constantine soon changed his mind and renamed it after himself, Constantinople or Constantinople. The city became the center of Greek culture and later the Orthodox Church. Many important church buildings were erected, the most famous of which is Hagia Sofia, at the time the largest building of its kind in the world. Later in 1204, Constantinople was looted by the troops of the 4th Crusade.

Istanbul was the main center of all trade and culture in the times of the Byzantine Empire as Constantinople, it remained so even after the conquest of Ottoman. They moved their capital, formerly Asia Minor, here and began to spread a very foreign Islam until then. Today's name of the city - Istanbul - has spread among ordinary Turks. Until 1930, however, the city was officially called Kostantiniyye, and foreign states still called the city Constantinople. It was not until 1930 that the city was officially renamed Istanbul and it was decided that the letters addressed to Constantinople would be shredded. New mosques were built (Blue Mosque, Tulip Mosque, Suleymaniye Mosque, the Hagia Sophia Cathedral was rebuilt into a mosque). The large number of very richly decorated temples from the Ottoman period is a remnant of the rule that each monarch built his own mosque in his honor. Traders from conquered territories, such as Greece, Serbia, Bulgaria and Armenia, settled here; Istanbul thus gained a cosmopolitan character. By the end of the 19th century, it was already a modern city of millions with underground and tram tracks, railway connections to Europe were a matter of course.

As the Ottoman Empire gradually weakened, there was an increasing threat that Istanbul would be occupied by foreign troops. Russia was explicitly interested in gaining the capital of the former Byzantium, which it considered an ideological and power goal; gaining this city would not only meet the goals of a number of panslavists, but from a strategic point of view, russia could control a single link between the black and mediterranean seas. The Western powers promised Russia several times during the division of the European part of the Ottoman Empire, but in the end this occupation did not materialize. However, the closest to him was the Russian Imperial Army during the war in 1877-1878.

The outbreak of the First World War became a change for the whole city, in which the Ottoman Empire, already very weak, joined the side of Germany and Austria-Hungary. However, the country lost the war, Istanbul was occupied by the victorious powers (England and France) and the empire collapsed. In five years, a republic was established under the leadership of Kemal Atatürk, but for tactical reasons, the state's headquarters were moved to Ankara. It lies inland and in the event of another war would not be so easily attacked. For the first time in its history, Istanbul has become a mere city.

A large number of Greeks still lived in the city in the 1950s, who have formed a community here since the fall of the Byzantine Empire. According to the 1910 census, out of a total population of 850,000, Istanbul was 260,000 Greeks. In 1923, after the Greco-Turkish War, 130,000 more Greeks remained in Istanbul. However, after the riots of September 1955, they were forced to leave; they became the target of violent and hateful attacks by Turkish ultranationalists. The then Prime Minister of Turkey, Adnan Menderes, who was behind the attacks, then launched a major modernization of the country, which, of course, affected its largest city and which also aimed to divert attention from the atrocities of the raging Turkish mob. New ones were built roads and highways, factories appeared, the economy grew. As a result, living standards rose, forcing other Turks to move to Istanbul. The city of one million has become five million in thirty years, and by 2000 it had surpassed Paris in size. Many small villages around the city have turned into neighborhoods with townhouses and industry, but often the level of development has been very low. The Bosphorus was bridged by two suspension bridges, a highway to the capital Ankara was created, and skyscrapers were erected. 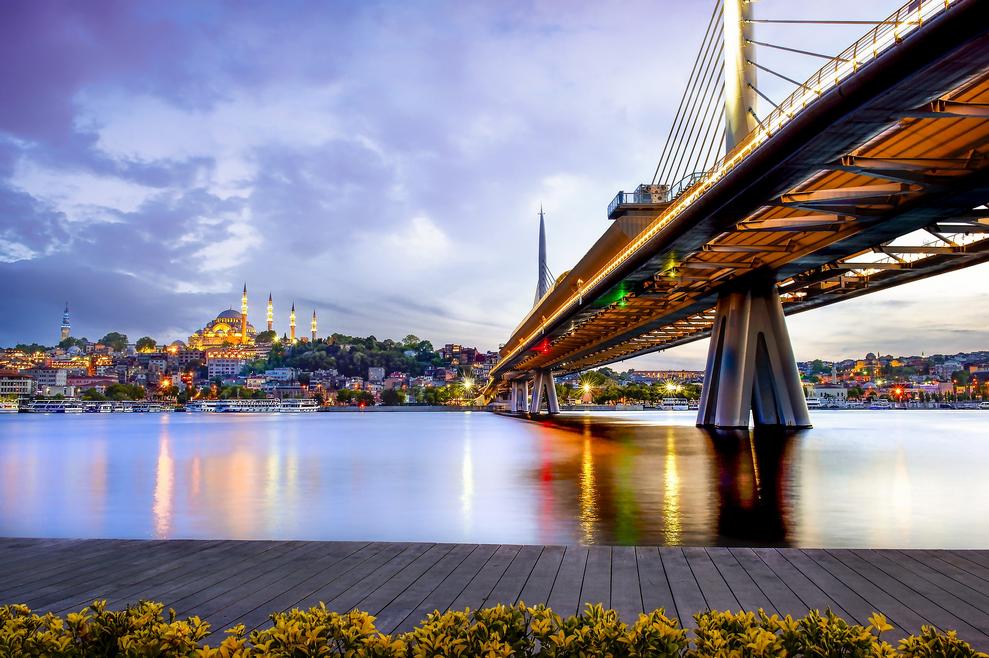 As a very important cultural and commercial crossroads, Istanbul has always attracted people of all professions, nationalities and religions. Therefore, it can be said that today Istanbul is a cosmopolitan city, where Muslims, Jews and Christians now live side by side in friendship and peace.

Each epoch has left indelible monuments in the city, the oldest of which date back to the time of the Eastern Roman Empire.

It is also known as Čemberlitaš - the oldest construction work in the city. Built in 330 on the occasion of the elevation of Byzantium to the capital of the Roman Empire by Emperor Constantine the Great.

Süleymaniye Mosque, thanks to its location on one of Istanbul's hills, is a well-visible landmark of the city. It was built during the reign of Sülejman Nádherný, during whose reign the Ottoman Empire became a world power. The four minarets with a total of 10 balconies are supposed to symbolize that Suleiman was the tenth Ottoman sultan and the fourth padishah since the conquest of the city. The mosque is a masterpiece of Ottoman classics and the interior, which illuminates a total of 138 decorated windows, corresponds to this. The mosque was built in just seven years. From 1557, its silhouette overlooks the city to this day. In addition to carpets, arcades made of angled arches and granite columns, chandeliers with bronze candlesticks, among which large, black, ostrich eggs can be seen, are also interesting. The mosque itself is part of a complex of buildings, which includes a madrasa, caravanserai, armory, hospital, imaret, spa and shops. However, these palaces were too small for the Sultan, so he decided to build the Topkapi Palace.

Topkapi Palace was the sultan's residence until 1839 and at the same time the center of government over the whole empire. In some times, up to 5,000 people lived here and the serail was a city in the city (see also the Jewelery in Topkapi Palace). The palace was separated from the rest of the city by a high mainland wall. Its name comes from the works guarding the entrance to it.

Dolmabahçe Palace is a representative empire palace on the banks of the Bosphorus, where Sultan Abdulmecid I and his court moved in 1855. The sea level reflects the ornate Ottoman-style building, which was said to be so expensive that it greatly contributed to the state's bankruptcy in 1876. The luxurious interior design faithfully respects the tradition of fairytale sultan's palaces, only its style is less oriental. Admirable is the amount of gold and heavy brocades in conjunction with large spaces. This seat of the Turkish sultans occupies an area of ​​about 700 thousand square meters. It is a large complex of palaces, pavilions, mosques, fountains and courtyards. The whole complex can be divided into four courtyards and a harem complex.

Hagia Sophia or the Temple of the Holy (Divine) Wisdom is a world-famous building in Golden Horn Bay. It has served as a museum since 1935. The building was built between 532-537 by Emperor Justinian I. On December 27, 537, the emperor ceremoniously opened the temple and said, "I have overcome you, Solomon." The cathedral is considered the most magnificent building of Byzantine architecture. It was built by 10,000 men for six years. It is one of the largest religious buildings in the world.

It was originally a Christian patriarchal basilica. After the conquest of Constantinople by Ottomans (1453), it was modified by Sultan Mehmed II, who had it converted into a mosque while preserving the interior, and added four minarets, retaining walls, wells, a kitchen and tombstones. Five Turkish sultans are buried in its vicinity.

In 1934, Mustafa Kemal Atatürk, then president of the Republic of Turkey, ordered that Hagia Sofia be secularized and rebuilt into a museum.

In July 2020, Hagia Sofia was converted into a mosque following a decree of President Recep Tayyip Erdogan.

The Sultan Ahmed Mosque is also known as the Blue Mosque due to its blue tiling of the walls. It is the most famous symbol of Istanbul after Hagia Sophia, it is the largest mosque in the city, which is the only one with six minarets. The rule applies to mosques: a regular mosque has one minaret, better can have two minarets, but only the mosque in Mecca can have six minarets. Legend has it that the sultan eventually had to have the seventh minaret built in Mecca.

The Tulip Mosque (Turkish laleli Jamii) is a mosque built in the 18th century under Mustafa III. The mosque is the most beautiful example of the Ottoman Baroque. Beyazit Tower - a well-visible landmark of the university, from the 19th century.

The Archaeological Museum (Turkish Arkeoloji Müzesi) is a museum with a significant collection of ancient art in the city. The most famous exhibit is the statue of Alexandra the Great and the sarcophagus of 310 BC.

The Grand Bazaar (Turkish Kapali Carşi) is a huge market under one roof, a classic Ottoman market. Almost 4,000 small shops are huddled next to each other, half of which belong to goldsmiths. Tourists walk through endless corridors and pass a plethora of goods. Other well-known bazaars include the Egyptian Bazaar and the Book Bazaar. The Egyptian Bazaar is located on the banks of the Bosphorus at Galata Bridge. It is much smaller than the Grand Bazaar, but it has its own charm. Most spices and dried fruits are sold here. The sellers have the goods in big bags and weigh the required quantity.

The Jerebatan cisterns, built in the sixth century, cannot be overlooked. They can hold 80,000 cubic meters of water.