Jakarta is the capital and largest city of Indonesia, with more than 9 million inhabitants without agglomerations. More than 26 million people live in the agglomeration called Jabotabek (2010). The city is located in the northwest of the island of Java, located in southwestern Indonesia.

For decades, Jakarta has faced the problem of the entire city gradually collapsing, so there is a risk that by 2030, about half of the city will be under water. This is due to the fact that Jakarta was built on swamps, under which there is an aquifer. The city's population has been pumping water from it for a long time, which is causing a decline. It is estimated that by 2030, it will be necessary to relocate approximately half of the city's population (approximately 4 to 5 million people) or to build large protective dikes to protect the city from the sea. However, the construction of dams in such a case would be only a temporary solution.

History of the town

The first settlement of this place was the port of Kalapa, which in the 12th century became the main port of the Kingdom of Sunda. The Portuguese were the first Europeans to arrive in the early 16th century, taking control of the port and obtaining permission from the then king to build a fortress. The port of Jakarta is still called Sunda Kalapa.

In 1527, the port came under the control of the ruler of the Sultanate of Bantam from the north. On June 22, 1527, the Bantamans changed the name of the city from Kalapa to Jayakarta (hence today's Jakarta), which means "victorious and prosperous" in Javanese. Today, this day is officially considered the day of the city of Jakarta. The Dutch came to Jayakarta at the end of the 16th century. In 1619, troops of the Dutch East India Company, led by Jan Pieterszoon Coen, occupied the city and renamed it from Jayakarta to Batavia, a Latin name for the indigenous tribes that lived in the Netherlands during ancient Rome. On March 4, 1621, Batavia became the capital of the Dutch East Indies. In 1811, the United Kingdom's fleet and troops invaded the island of Java. The British then occupied the island for five years. At that time, the Dutch were still struggling with French domination as a result of the Napoleonic Wars, so they could not effectively defend Java. In 1816, Java was returned to the Netherlands, and all of present-day Indonesia remained its colony until 1949. 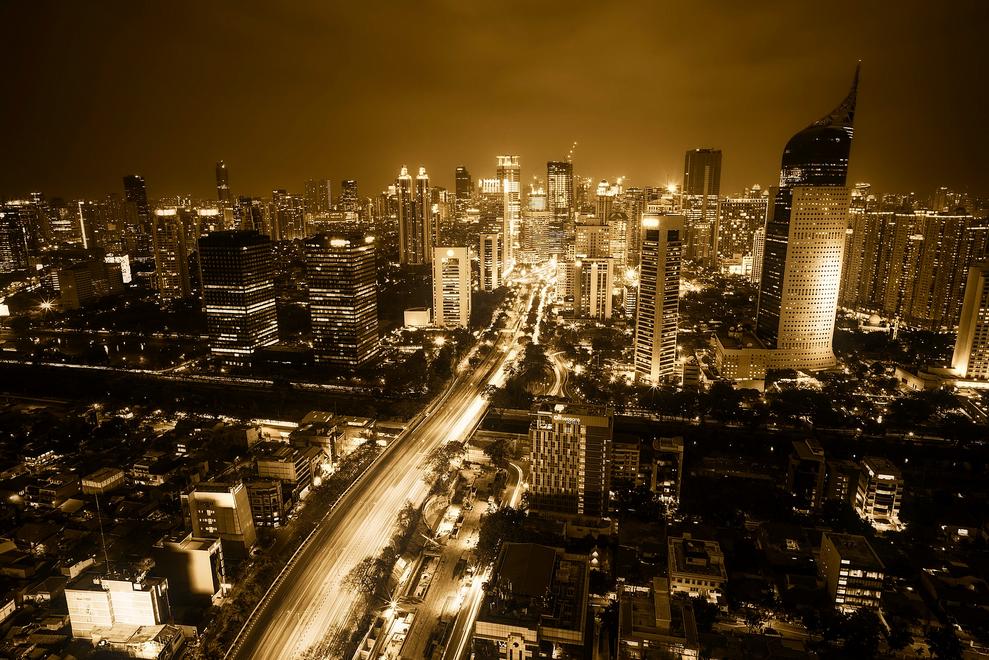 In 1942, during World War II, Japan took over the country. The Japanese changed the name of the city to today's Jakarta. After the creation of the state of Indonesia, Jakarta became its capital in 1949. Over time, it turned into a modern city (so-called megacity).

On January 14, 2016, terrorists who joined the so-called Islamic State attacked a busy business district in Jakarta with a series of bombings. The target was to be foreign nationals and local armed forces. Police killed five terrorists, the attack claimed two lives.

The National Museum of Indonesia (Museum Nasional Indonesia), founded by the care of Dutch scholars - first as a learned society, dates back to 1778 and has been a full-fledged museum institution since the decision of the colonial authorities; according to the statue standing in front of the main building also called Gedung Gajah ("Elephant House") or Museum Gajah.

Jakarta is also home to the largest mosque in Southeast Asia - the Istiqlal Mosque. The symbol of the Indonesian struggle for independence is the Monas (National Monument), completed in 1975.

Jakarta hosted the 1962 Asian Games, and the 2018 Asian Games, co-hosted by Palembang. Jakarta also hosted the Southeast Asian Games in 1979, 1987, 1997 and 2011 (supporting Palembang). Gelora Bung Karno Stadium hosted the group stage, quarterfinal and final of the 2007 AFC Asian Cup along with Malaysia, Thailand and Vietnam. The largest capacity retractable roof stadium in Asia JIS is located at Tanjung Priok district, completed in 2022.

The Senayan sports complex has several sports venues, including the Bung Karno football stadium, Madya Stadium, Istora Senayan, aquatic arena, baseball field, basketball hall, a shooting range, several indoor and outdoor tennis courts. The Senayan complex was built in 1960 to accommodate the 1962 Asian Games. For basketball, the Kelapa Gading Sport Mall in Kelapa Gading, North Jakarta, with a capacity of 7,000 seats, is the home arena of the Indonesian national basketball team. The BritAma Arena serves as a playground for Satria Muda Pertamina Jakarta, the 2017 runner-up of the Indonesian Basketball League. Jakarta International Velodrome is a sporting facility located at Rawamangun, which was used as a venue for the 2018 Asian Games. It has a seating capacity of 3,500 for track cycling, and up to 8,500 for shows and concerts, which can also be used for various sports activities such as volleyball, badminton and futsal. Jakarta International Equestrian Park is an equestrian sports venue located at Pulomas, which was also used as a venue for 2018 Asian Games.

The Jakarta Car-Free Days are held weekly on Sunday on the main avenues of the city, Jalan Sudirman, and Jalan Thamrin, from 6 AM to 11 AM. The briefer Car-Free Day, which lasts from 6 AM to 9 AM, is held on every other Sunday. The event invites local pedestrians to do sports and exercise and have their activities on the streets that are usually full of traffic. Along the road from the Senayan traffic circle on Jalan Sudirman, South Jakarta, to the "Selamat Datang" Monument at the Hotel Indonesia traffic circle on Jalan Thamrin, north to the National Monument in Central Jakarta, cars are blocked from entering. During the event, morning gymnastics, callisthenics and aerobic exercises, futsal games, jogging, bicycling, skateboarding, badminton, karate, on-street library and musical performances take over the roads and the main parks.

Jakarta's most popular home football club is Persija, which plays in Indonesia Super League. Another football team in Jakarta is Persitara who compete in 2nd Division Football League and play in Kamal Muara Stadium and Soemantri Brodjonegoro Stadium.

Jakarta Marathon each November is recognised by AIMS and IAAF. It was established in 2013. It brings sports tourism. In 2015, more than 15,000 runners from 53 countries participated.

In June 2022, Jakarta will host the Jakarta ePrix race of the Formula E championship in Ancol, North Jakarta.

As a metropolitan area of about 30 million people, Jakarta has a variety of transport systems. Jakarta was awarded 2021 global Sustainable Transport Award (STA) for integrated public transportation system.

The city prioritized development of road networks, which were mostly designed to accommodate private vehicles. A notable feature of Jakarta's present road system is the toll road network. Composed of an inner and outer ring road and five toll roads radiating outwards, the network provides inner as well as outer city connections. An 'odd-even' policy limits road use to cars with either odd or even-numbered registration plates on a particular day as a transitional measure to alleviate traffic congestion until the future introduction of electronic road pricing.

There are many bus terminals in the city, from where buses operate on numerous routes to connect neighborhoods within the city limit, to other areas of Greater Jakarta area and to cities across the island of Java. The biggest of the bus terminal is Pulo Gebang Bus Terminal, which is arguably the largest of its kind in Southeast Asia. Main terminus for long distance train services are Gambir and Pasar Senen. High-speed railways being constructed connecting Jakarta to Bandung and another one is at planning stage from Jakarta to Surabaya.

Privately owned bus systems like Kopaja, MetroMini, Mayasari Bakti and PPD also provide important services for Jakarta commuters with numerous routes throughout the city. Pedicabs are banned from the city for causing traffic congestion. Bajaj auto rickshaw provide local transportation in the back streets of some parts of the city. Angkot microbuses also play a major role in road transport of Jakarta. Taxicabs and ojeks (motorcycle taxis) are available in the city.

Jakarta is part of the Maritime Silk Road that runs from the Chinese coast via the Suez Canal to the Mediterranean and there to the Upper Adriatic region.